The Silver Mask by Christian Ellingsen 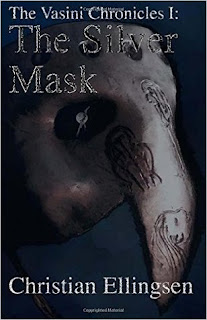 "As with the deaths of the gods and goddesses, it is unclear how Serindra died. It is simply known that one day the moon was whole and the next she had cracked and great tendrils reached out from her temporal form. In recent times, closer inspection with telescopic devices has shown these tendrils are made of the very rock that formed the body of the moon and may well be the rocky shooting stars that periodically crash to earth carrying the deadly quicksilver ore, cinnabar."

I've come across this book a few times on reddit and in my goodreads feed, but never really felt the need to check it out, the incredibly dark cover just wasn't catching my attention. But I should've read this ages ago! The Silver Mask is engaging right from the start, throwing us into a story full of falling stars, murder, hidden cults and political intrigue.

The gods are dead, have been for many, many years, and despite the broken land and terrifying monsters, mankind has thrived without them. But not everyone is happy and when a well loved woman named Vittoria ends up dead, Captain Fox must solve her murder before the town erupts into a politically charged catastrophe that can't be stopped. It has a Sherlock Holmes, Clive Clussler feel to it that makes it a fun read from start to finish. The awesome world building and creepy, mutated monsters were just as entertaining as the plot.

"Ahead, standing on malformed legs, was a bear. The creature's paws were rending the flesh from a deer. A proboscis-like mouth was dripping black viscous fluid onto the deer's flesh causing it ti steam and reduce to a pulp. The thing dipped its proboscis into the pulp and suctioned the fluidic flesh."

The only real complaint that I have with this one was that certain pages were hard to read. Scattered through out The Silver Mask are documents and letters that pertain to the murder mystery, and while I loved that they were there (and some of the writing was really pretty), I would've loved it even more if there had been an easier to read version in the back.

Overall I felt like The Silver Mask was a really exciting read with great characters and I can't wait to see what Christian Ellingsen writes next. The mystery was fun, the world was interesting and the cult style religion just made the whole thing even better. 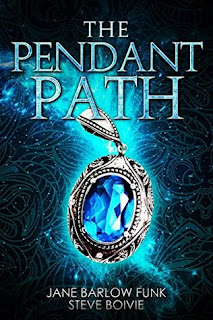 The Pendant Path by Jane Barlow and Steve Boivie